The AGRETO soil compaction tester is made from stainless steel (including the handles) and is practical, accurate, easy to use and guaranteed for 5 years. The probe is 750 mm long and marked at 75 mm intervals. The pressure gauge uses a traffic light scale (Green, amber, red ) with two scales in order to be used with both the 19 mm and the 13 mm tip. The smaller tip is most commonly used for unworked soils. Most roots are not able to penetrate soil which has a compaction reading of more than 250 pounds per square inch (approx. 1800 kPa). Inadequate root growth results in sub optimal uptake of the available nutrients.

Soils become compacted by ploughing when wet, by chemical agglomeration and by mechanical compaction either by vehicle traffic or animal hooves. The space between the larger soil particles is filled by smaller particles making a solid layer which cannot be penetrated by moisture or roots. This is often aggravated by some forms of plough share. Any type of soil can become compacted.

Healthy soil with good drainage and structure is the basis for a good yield, use this tool to plan and monitor your strategy to improve the soil. If you don’t measure it, you can’t manage it.

There are no reviews yet.

Soil compaction should be a matter of serious concern for farmers. Soil compaction can easily reduce crop yields by 10 to 50% percent, and can lead to water and soil quality degradation due to increased runoff and soil structure destruction. Compacted soil eliminates important air pockets, increasing the soil bulk density (weight per volume). It can be caused by heavy farm equipment, rain events, livestock traffic and lack of organic material. Soil is susceptible to being compacted when pressure is applied to moist soil. Spring planting or soil preparation should only be done when the soil is dry enough so that the heavy farm equipment will not cause compaction.
When pore space is reduced in the soil it is very difficult for roots to push through in a search for water, resulting in a weak or shallow root structure. Restricted root growth directly affects crop growth and yield. The symptoms may resemble nutrient deficiency, when the real culprit is soil compaction which is hindering the transport of nutrients. While roots are struggling to find water, water is also struggling to move through the soil. Rain and applied water will have difficulty infiltrating, and may cause pooling, runoff, and erosion. When there is imadequate pore space in the soil, water will fill every crevice and create a lack of oxygen.
Soil compaction can become a VERY serious problem if it goes unnoticed for too long. Compaction is an issue that will likely be recognized in importance in the years to come. When soil compaction is measured, real-time decisions and long-term strategies can be made to alleviate the compaction in the field which will lead to improved yields in the long-term. The efficacy of products applied to decrease compaction can also be demonstrated by using the compaction tester.
There are two forms of compaction: surface and subsurface. While surface compaction can be partly alleviated with standard soil preparations, subsurface compaction below the normal tillage depth will remain. Many farmers suspect they have a subsurface compaction problem, but have no handle on how to measure it. A diagnostic tool to measure the extent and depth of subsurface compaction is a penetrometer, or soil compaction tester.
When we deal with soil which has been worked, it is best to use the larger tip. Tighten the tip with pliers and be careful not to let it come off in the hole. The larger tip is for sandy to sandy loam, the small tip is for more clay soil.

A root can penetrate soil equivalent to a pressure of 300 psi. on the meter. (About 2 o’ clock on the scale if you are using the large tip). Soils giving readings of 200 psi and less are no problem.

The penetrometer is designed to mimic a plant root. Of course, a plant root is living, and much smaller than a penetrometer, so the penetrometer can be expected to have some shortcomings. In studies conducted at the USDA Agriculture Research Service (USDA-ARS), root penetration into soil cores packed to different densities was measured and compared to penetrometer readings. Root penetration decreases linearly with penetration resistance, until almost no roots penetrate into soil with a penetration resistance of 300 psi. ( see below.) Much of this research was done with cotton, but it also appears to hold true for other crops. Although the limit of zero root growth may not be exactly at 300 psi, it is certain that root growth will be greatly inhibited at higher penetrometer readings. This is true in both wet and dry soils, and is independent of soil texture. Unfortunately, the penetrometer does not capture pores created by earthworms or biological forces and root channelling. Plant roots will find and grow through these spaces in the soil if they are present.

The actual reading depends on the available soil moisture. Compare lands of similar moisture level. The readings taken with the penetrometer are called the cone index. The readings should be taken when the whole profile is at field capacity (approximately 24 hours after a soaking rain or irrigation). If the soil is too wet (muddy), compaction could be underestimated because the soil acts as a liquid. If the soil is too dry, compaction could be overestimated because roots will be able to penetrate the soil when it dampens. The idea behind using the penetrometer at field capacity is that this is the best-case scenario for roots. During these periods, roots will be able to penetrate soil that has low penetration resistance. Penetration resistance will increase when the soil dries out, and root growth can then be expected to be limited. However, when the moisture content of the soil increases again, penetration resistance will decrease, and root growth will resume.

Push the meter into the soil steadily until 300 psi and note the depth reached. (Each mark is 3 inches =75 mm) then compare data.

Do not go much above 300 psi and do not bend the shaft. You can get quite a good “feel” of what is below the soil surface as the point penetrates.
The penetrometer rod should be driven in the soil at a rate of approximately 3 cm per second. Don’t worry about the air bubble in the gauge. The gauge is oil filled to protect against vibration. After much use, if the gauge is damaged, we can repair it.

For each measuring point, there are two numbers: the top of the compaction zone and the bottom of the compaction zone. If penetration resistance never increases above 300 psi, you will have blanks in both spaces, indicating no severe root-limiting compaction. If the penetration resistance increases above 300 psi, but never falls below 300 psi, there is no bottom to the compaction zone.
Measure penetration resistance in and out of the subsoiled zone. If there are planted rows, take measurements in and between the rows, and report them separately. Take separate readings for trafficked and non-trafficked areas.
The number of readings in a field depends on the accuracy you desire. As a first approximation, take some preliminary readings at a few places in the field to develop a sampling strategy. The cone index values are likely to be quite variable, so multiple readings are required per field. It is recommended to take one reading every 30-40m, or 6-8 readings per ha to develop a solid recommendation. It is extremely useful to compare the cone index values in the field with measurements in undisturbed areas
If there is already a crop in the field, it is useful to dig down to the 300psi level and check the root growth. Often soil diseases and nematodes are concentrated at that level.

Soils become compacted by ploughing when wet, by chemical agglomeration and by mechanical compaction either by vehicle traffic or animal hooves. The space between the larger soil particles is filled by smaller particles making a solid layer which cannot be penetrated by moisture or roots. This is often aggravated by some forms of plough share. Any type of soil can become compacted.

Healthy soil with good drainage and structure is the basis for a good yield, use this tool to plan and monitor your strategy to improve the soil. If you don’t measure it, you can’t manage it.

Using the AGRETO Soil Compaction Tester
1. Screw the handles into the upper part.
2. Performing measurements  Choose the tip that best suits the type of soil you have. The small tip is used for hard soil and the larger tip is used for loose soil.  Slowly insert the probe into the soil. Hold the probe only at the handle and not at the display.  The bracket can be used as indicator of the plunge depth.  The pressure profile is displayed continuously. Watch the pressure profile during the plunge. There is a compacted layer when the pressure at a certain depth rises abruptly and upon further pressure goes down. The displayed value represents the pressure that must be applied with the tip used to penetrate the soil layer. When using the 13 mm tip, the inner scale is valid. When using the 19 mm tip, the outer scale is valid. The red, yellow and green colouring of the scale helps the user to evaluate the results.  Repeat the measurements at different places. Soil compaction will be higher on vehicle tracks..
3. Other notes  Bumps and impacts can damage the pressure gauge  Transport the unit in horizontal position with the clamp in place.

Manual and Videos
Any Questions? 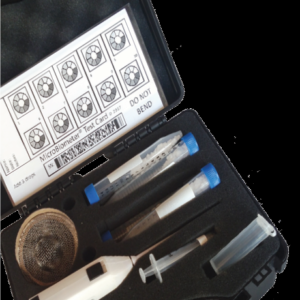 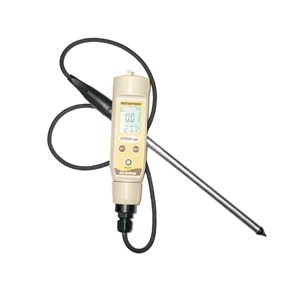 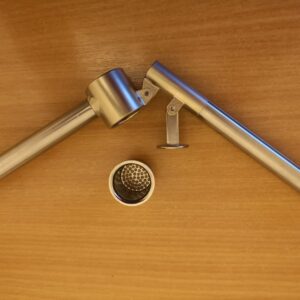 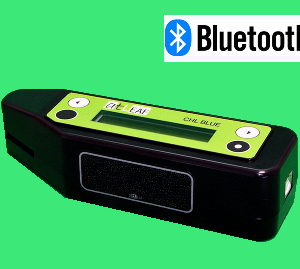